Film Premieres on Oct. 15 and 17 as a Special Two-Night Event 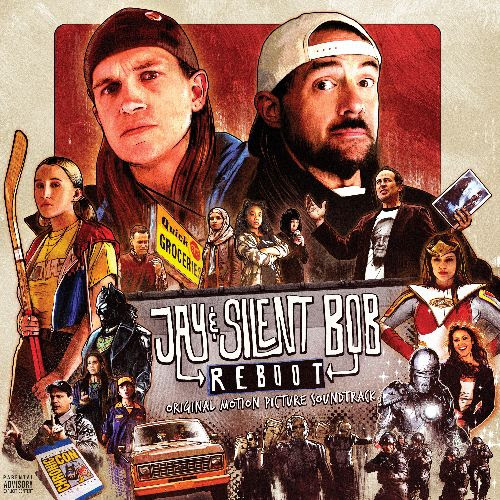 PRE-ORDER / PRE-SAVE THE SOUNDTRACK HERE(October 14, 2019)  Entertainment One (“eOne”) is excited to announce the CD & digital release of Jay & Silent Bob Reboot – Original Motion Picture Soundtrack, on November 1, 2019 at physical and digital retailers everywhere.  The 26-track soundtrack features 13 dialog clips as well as 13 musical tracks, including Moby Rich, Nappy Roots, REO Speedwagon, P.M. Dawn, the tenth, Mary Born and more. Director Kevin Smith executive produces, while Amine Ramer serves as music supervisor and producer of the collection. Preorder the soundtrack HERE: Jay & Silent Bob Reboot is an all-new, 2019 American comedy film written, directed, edited, and starring Kevin Smith. Referring to his 2001 comedy Jay and Silent Bob Strike Back, Smith has described the film as “literally the same fucking movie all over again”. It is intended to be the seventh film in the View Askewniverse. The film also stars Jason Mewes, and features Smith regulars, including Jason Lee, Brian O’Halloran, plus other classic cameos. The film will be shown on over 600 screens as a two-night Fathom event on October 15 and October 17. Co-stars Kevin Smith & Jason Mewes then commence a special 60+ city tour on Oct. 19th, personally attending 80+ screenings through February 2020, with tickets available HERE.  Kevin Smith says, “I grew up listening to movie soundtracks. We had no home video or internet back then, so a soundtrack was the only way to keep the experience going after the movie ended. A soundtrack is still an amazing way to relive a movie, and eOne let me put together a selection of songs that summon up not only Jay and Silent Bob Reboot, but a few of my other flicks as well! Many thanks to my partners at eOne for keeping the magic of movie soundtracks alive in our Reboot record!”

Ken Gullic, eOne’s VP, Soundtracks, says, “No one’s better at putting the heart, mind & soul of suspended adolescence onto the big screen than Kevin Smith; and this latest film extends the winning streak that comprises his vast cannon of works. There’s tons of fan service, lovingly spilled out all over the place, not to mention an adult storyline to boot. If this soundtrack captures the half of it, we’re pleased and honored to partake.”

A special collector's “Weed Green” vinyl edition of the soundtrack was also just announced for the Black Friday installment of Record Store Day this year, which falls on November 29.  The debut vinyl edition can be found exclusively at independent stores HERE.