The last few years will go down in history as one of rebirth and reimagining. No genre has felt this shift more than Hardcore. Coming out of virtually nowhere with their 2014 EP Pop Culture and again with their debut full length in 2016’s Laugh Tracks, Kentucky Hardcore outfit Knocked Loose brought a very abrupt and welcome disruption to the industry. The impact that these guys have been able to make in such a short amount of time is nothing less than impressive in a time when most of the saddest generation were headbanging along to sad-bois with face tattoos lamenting over lo-fi beats. There is no over the top production just five guys playing music designed to punch you straight in the throat, very reminiscent of bands like Beartooth, which is very high praise indeed.

A Different Shade Of Blue the band takes us on a journey of discovery that has a sound that is truly their own. As soon as the album begins with “Belleville” the recognizable chugging of the dual guitars begin. Knocked Loose are very much able to craft music that can be immediately attributed to them, with vocalist Bryan Garris’s signature soul shredding screams driven home by the guitar duo of Cole Crutchfield and Isaac Hale there is no denying that a song belongs to them from the very first note.

With their sophomore release, refinements are abundant. Musically the band sticks to what has made them so popular in the first place, heavy guitars and blasting drums paint a background that Bryan is happy to cut through with his searing screams. With lyrics that are some of the best they have ever penned, this is the best version of Knocked Loose available. I get chills when I hear the intro of Mistakes Like Fractures, the bands lead single from this album, begin as the trailing notes of Guided By The Moon lead gently into their best song to date. Detailing feelings of abandonment when you need help the most is punctuated by the cries of “God fell silent when I cried out” really drive the point home. With jams like In The Walls you can absolutely feel there has been some bad blood spilled with cries of “Selfish Lies”, where there is talk of literally keeping someone in the walls that one has built.

Most impressive is the talent the band enlisted to help Bryan get his point across. On “Forget Your Name” Keith Buckley of metalcore legends Every Time I Die makes an appearance while Dying Wish’s Emma Boster shows up to tear up A Serpents Touch with furiosity. She has a sound that is very much in league with the tone the song is trying to set. Further punctuating the vocal landscape is lead guitarist Issac Hale. His deeper toned growls help to offset the more high pitched scream of Bryan, lending his demonic tones at exactly the right moments, with a longer part in closing track “Misguided Son”.

From the very beginning the band’s career, the tone was set. Elaborate production and computer generated drums were nowhere to be found, replaced instead with a humanity that can be felt with every note. Knocked Loose are a band that have a very recognizable sound that was crafted by the very talented parts to the whole. Backing up the entire train from hell sound that has made them a household name in the hardcore scene, bassist Kevin Otten and drummer Kevin "Pacsun" Kaine keep the whole outfit on the tracks by weaving the darkness on a rythmically cohesive path. The entire sound is a culmination that is more than the sum of its individual parts. 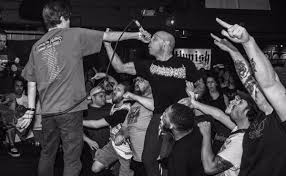 I had the privilege of seeing Knocked Loose this summer during their run as direct support for scene legends A Day To Remember and I can tell you first hand that this group is able to bring the noise like no other. In a very short amount of time the band has been able to manifest the atmosphere of a moshpit into a musical medium. Blending heartfelt lyrics of loss and betrayal with the dark instrumentation that takes guitar riffs that feel like the audio equivalent of swinging fist, you can't help but understand what they are trying to say. This is worth the listen, especially if you are on the way to your own personal gallows, don’t worry, you are not alone.

A Different Shade Of Blue is available now on ALL major streaming sites and on vinyl here.

Catch them on tour now and thank me later.