RPM Fest Brings Metal to Massachusetts for a 5th YEAR!

The fifth annual RPM Fest united the Western Mass metal scene this past Labor Day in the beautiful outdoors of Montague, Massachusetts. Proudly hosted by the Miller’s Falls Rod and Gun Club, the festival boasted two outdoor stages and one pavilion, still with plenty of room for cornhole tournaments and a vast forest of campers. There was never a dull moment, with over 50 bands spanning three days, tons of unique vendors, and a variety of food trucks. As if that wasn’t enough, each day of the festival scheduled activities both before and after the daytime performances. There was something for everyone, between Metal Yoga (lead by Daayani Yoga), Metal Karaoke (Led by Justin Belden of PWRUP), a live podcast from Promoterhead, and so much more. 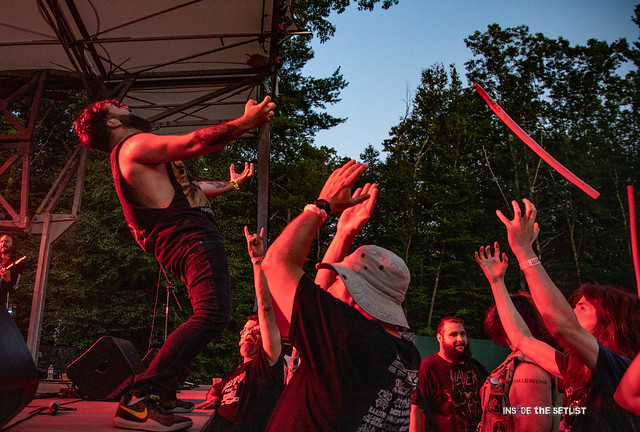 Day one of RPM kicked off with Matt Kim’s Academy of Rock, a group of middle and high schoolers out of Greenfield Mass under the guidance of local rocker Matt Kim. They opened with a kickass cover of Aces High by none other than heavy metal icon, Iron Maiden, which carried right through to Two Minutes to Midnight. I didn’t know how much energy to expect from the first band of the fest, but these kids powered through their set, doing justice to every tune they played and prepping the growing crowd for what the rest of the day had in store.

Shadow Witch of Kingston NY took the stage next with an exciting combo of doom and thrash metal. The audience was continuously growing as the morning progressed, and I followed as the crowd headed towards the Enthusiast stage to catch Oroboro. Self described as a “squelching knot of abhorrent mania”, this Boston band had a power like no other, as front-woman Emily Carter overtook the space with her guttural vocals and erratic stage presence.

I made my way to the Cherryrail Farm stage later that afternoon to catch RPM legends Lich King, who have performed nearly every year so far, and for obvious reasons. I could tell they were a crowd favorite. The audience participation was the greatest I had seen all day, and it wasn’t over yet! Psychostick finished off the night with their comedy-rock style performance, dominating the stage with their goofy outfits and playful demeanor.

The night came to a close with Metal Pub Trivia under the pavilion, hosted by Too Sketchy Dudes Comics, before everyone headed back to their campsites to get some well needed rest before taking on day two. 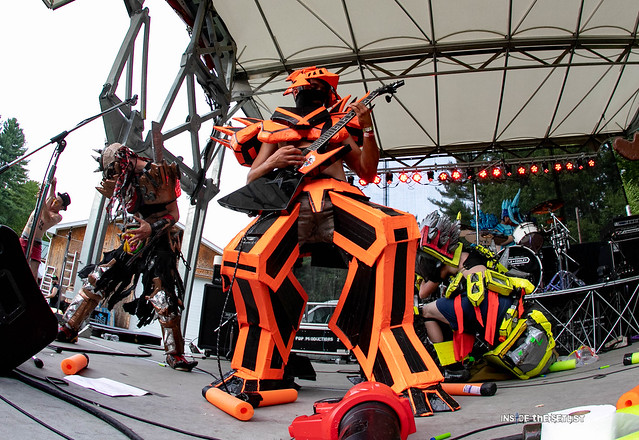 Day two of RPM opened with local metal band The Steelface Circus, from Worcester MA. Eleven year old Vocalist Liam Steelface stole the crowd’s heart with his gnarly vocals, proving to everyone that age is just a number when it comes to true talent. Backed by friends and bandmates Gerry Garcia (guitar) and Riley Steelface (drums, bass), the group annihilated their set and surely left a lasting impression on everyone around.

Before heading over to catch Virus of Ideals at the Cherryrail Farm stage, I made sure to check out some vendors. I stopped to chat with the guys over at Rock Land Music, who had their own trailer that had been fully renovated into a portable guitar shop! Their impressive display offered everything you would expect from a guitar shop and more, from amps and guitars to custom-made headstocks. Be sure to check out them out, their unique craftsmanship truly deserves serious recognition.

Later on, I caught sheet-metal band Gwell-O at the Cherryrail Farm stage. After finding out that they are heavily inspired by GWAR, who are known for their elaborate costumes and theatrical stage presence, I was beyond stoked to see what they had to offer. Sure enough, I was not disappointed. Each member took to the stage wearing unique costumes depicting various otherworldly beings and put on one of the most exciting performances of the day.

RPM Fest would not be complete without an appearance from witch-city metal band Carnivora from Salem, MA. Marking their fourth year at RPM, Carnivora drew one of the largest crowds I had seen at the festival yet. Fans both old and new swarmed the Cherryrail Farm stage to catch a glimpse of powerhouse vocalist Haydee Irizarry as she tore through their set, flawlessly transitioning between deep gutturals to gorgeous clean vocals. A moment of nostalgia took over as Carnivora welcomed former vocalist Mike Lentine on stage for their song Human Decimator, and the audience went wild. There’s really something special about witnessing a band who’s individual members come together seamlessly as one, and Carnivora set the bar high with their jaw-dropping performance.

Kentucky based metal band The Stonecutters finished off the second night of RPM with a set that fully encapsulated the intensity that had built throughout the day. The crowd clearly wasn’t ready to quit just yet, and managed to keep the party going for one more run, all the while maintaining a giant circle pit that carried through to the very last song.

For those who weren’t ready to hit the hay just yet, an After Party hosted by Dirty Lil' Sex Brats, Rainbowdragoneyes, and Pariah took place under the pavilion, along with various projector video games. 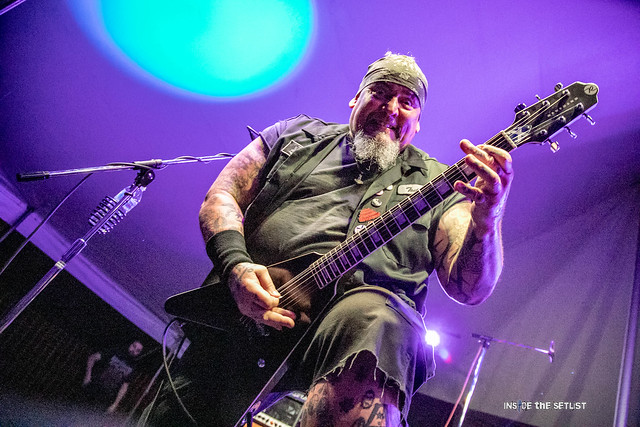 As day three rolled around, I found myself already a bit bummed that the weekend was coming to an end. But it wasn’t over just yet, RPM still had plenty to offer on their last day of performances. I stopped by first thing in the morning to catch Boston based hardcore band DNZL at the Ginger Libation stage, who were immediately followed by Husbandry from New York City.

By the time noon hit, I found myself once again at the Cherryrail Farm stage just in time for Rum Ham, who’s powerful performance drew the rest of the sleepy campers out of their tents and into the pits. Even though everyone was pretty shot from the past two days of non stop partying, it was hard to tell since everyone had managed to muster up the energy to match that of the performance. Following Rum Ham was Extinction A.D. from Long Island, NY. They proved their slogan to be true as they succeeded in leaving “no head unbanged” during their performance, provoking even the shyest of audience members to get their bodies moving to the music.

Day turned to dusk as I anxiously waited for Long Island fusion-metal band Moon Tooth to hit the stage. I had heard a lot about them over the course of the weekend, but nothing prepared me for what I was about to witness. Each member of the band had spectacular stage presence, one of the most important aspects to putting on a great show. Vocalist John Carbone took things to the next level when he catapulted himself off of the stage and directly into the middle of the circle pit that hard formed during their set. Initially, I had thought that he was continuing the performance surrounded by the audience, as artists sometimes do, but the reaction of the crowd told me that something a little unusual was taking place. As I made my way through the barricade of bodies, I caught a glimpse of Carbone as he buried his face in the dirt and erratically smeared mud all over himself while still screaming along with the rest of his band mates. It was pretty refreshing to see a live performance exude such a spontaneous display of emotion within their set.

I made my way back to the Ginger Libation stage for the last performance of the night from Mobile Deathcamp. Even though it was my first time seeing them perform, I could tell that this Ohio based band had quite a dedicated following here in Massachusetts. I took a quick break from shooting to watch in amazement as the audience wreaked havoc beneath the stars, maintaining the same energy for the very last set as they did at the beginning of the festival. Vocalist Todd Evans engaged with the crowd throughout the whole set, screaming in the faces of enthusiastic fans who gave it right back. As their set came to an end, Evans held his guitar out for everyone to make some noise of their own. I couldn't help but think of how special that moment was for everyone, a gesture that really showed how tight of a community the metal scene can really be.

All in all, the fifth year of RPM Fest was an absolute success. This was my first year in attendance, but I am so beyond excited to see what else is to come. Hearing the history of this festival, all of the work that goes into it, and how far it has come over the years made me realize that RPM is here to stay. There really is nothing like being surrounded by hundreds of people who all share the same passion of heavy music, and RPM has truly become a staple in the Western Mass music scene. It was an honor to experience such an event, and I can’t wait to see what they have in store for next year.